Hey guys, perhaps some of you are aware of all this, but this post is just to update you on some stuff that has been going on in the last week.

To provide you with a bit of background; last Wednesday I travelled to the Herzegovina city of Siroki Brijeg with a bus-load of other Celik Zenica fanatics to lend our support to Celik in the Bosnia-Herzegovina Cup competition.

As we were passing the city of Mostar upon our return to Zenica, our bus was attacked with rocks and other miscellaneous items, apparently by supporters of local football side Zrinjski.

I was personally injured in the attack, with something (a rock, I believe) striking me in the head. I required medical treatment - 3 stitches, to be precise - and an overnight stay at Mostar's Hospital.

Just as I was about to check out of the hospital on Thursday afternoon, a female journalist (of whom I only know as 'M. Hodzic'), from Sarajevo's daily newspaper Dnevni Avaz, visited me in my hospital room to ask a couple of questions about the incident.

Although I was a bit apprehensive to discuss the whole thing publicly, I felt a bit of compassion to at least provide some honest answers to a fellow journalist.

However, upon reading the version of the article which was put to print on Friday by that particular journalist, I was extremely unhappy to read certain things that were blatantly untrue.

Here is a photo of the article and, accompanied underneath, the section about me translated into English: 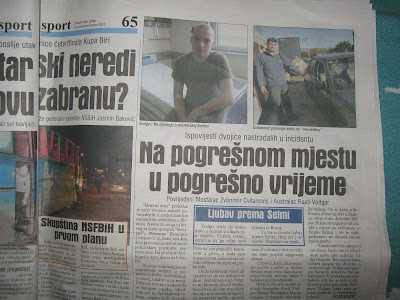 'Nothing better passed young Australian Rusty Woodger, who was injured in the attack by Zrinjski supporters. He, as he said, came in February to live in Zenica because of his girlfriend Selma. His friends invited him to the match in Siroki Brijeg and he openly accepted it, not knowing what's going to happen to him.

"I just fell asleep on the bus when suddenly something strong hit me. I see the stone. I was in shock, I couldn't understand what was going on. I see outside the group of angry young guys throwing the stones. At first, it didn't hurt me, nor was I afraid, but after that I fell into shock," Woodger said to us when we visited him yesterday in Mostar hospital.

Firstly, in response to the first underlined section; the way this is expressed is not entirely true. I was not 'invited' to the match by anyone. I read on the Internet that Robijasi (supporters group of Celik Zenica) were organising a bus to and from the away match in Siroki Brijeg - of which perked my interest. A day later, I decided to buy a ticket. I also knew that there was very much an associated risk with attending this match - it is no secret of what happened to FK Sarajevo supporter Vedran Puljic on an away match in that city just over 3 years ago. During the interview from the reporter, I never once intimated anything which would suffice for why the journalist wrote that particular sentence.

Moving on to the second underlined sentence - of which I believe is much worse - the reporter has quoted me as saying a vital piece of information of which I did not say! At no point did I see anyone or anything outside of the bus. I was hit in the head almost immediately as the attack began; being as dazed as I was, how could I see anything outside in the darkness of night? Never mind the question of how I could remember it, nor why I would even turn to look outside when extremely dangerous objects are being thrown inside the bus. On this occasion, the journalist has blatantly put words into my mouth; providing lies just because it helps her nicely round out her story.

Some people reading this might think 'Who cares?', but there are two main reasons why this irks me as much as it does.

First, unlike every other supporter who was on the bus, I have yet to be interviewed by police over the incident. If they have read my quotes from this popular newspaper, and I tell them that I saw nothing and nobody out of the bus (which is true), they could assume that it is me who is lying.

Secondly, publications of such mis-truths so openly in this section of the mainstream media have caused me to seriously question the reliability of some of the news outlets based in this country; not least because I regularly utilise them as sources for my own articles.

Moreover, my main gripe is not based solely around the fact I have personally been mis-quoted and mis-represented, but also due to the fact that this sort of misinformation tarnishes the profession of journalism, and makes it more difficult for the general public to trust what they are being told by their so-called 'unbiased' and 'fair' media.

Perhaps some of you believe that this journalism 'incident' is only a minor occurrence that does not deserve much attention, which might be true, but I think this is a problem which is taking place much more regularly than we think. I mean, we, the general public, are receiving the information from journalists believing that they have done thorough and responsible research into the topic; at no stage, in theory, should we be forced to question their integrity to a large degree.

This is, therefore, an issue that needs to be confronted head-on, so that in future we are not allowing people to be mis-represented, facts to be distorted, and lies to be told.

PS. For those who are wondering, the result of the match between Siroki Brijeg and Celik Zenica was 1-1. The return leg of the tie will be played on Zenica's Bilino Polje on Wednesday November 21. The winner of the fixture will move on to the semi finals of the Bosnia-Herzegovina Cup competition. Naprijed Celik!
Posted by Unknown at 23:22