After crossing through seven countries by foot, Senad Hadzic finally made it to Mecca a number of days ago.

The 47-year-old arrived last Saturday after setting off from his home-town in northern Bosnia in December last year, in which he travelled through Serbia, Bulgaria, Turkey, Syria and Jordan before, finally, reaching Saudi Arabia.

Carrying a backpack weighing 20 kilograms along the entire route, Hadzic went through 12 pairs of shoes, three large rucksacks, seven tracksuits and around 1000 pairs of socks.

Further to that, the Bosnian also ended up going through 7 mobile phones and three pairs of glasses.

Upon arriving at his destination after almost a year of walking, Hadzic said although he was tired, "these (were) the best days of (his) life".

If Senad's journey didn't sound astonishing enough, it is worth pointing out the fact that he was fasting every day during the month of Ramadan - despite daily temperatures sometimes reaching in excess of 40°C.

By the way, here's a photo of my fiancé's uncle (left) grabbing a photo with Senad at Mecca - with the two of them both completing this year's Hajj pilgrimage. 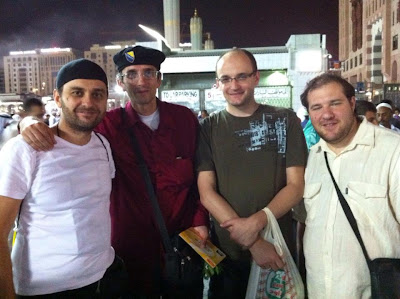